FOR THOSE WHO FORGET TO LOCK

A new type of security device for more demanding customers, which is semi-automatic and automatically locks the gear-lever.

It will thus never happen to you that you leave the vehicle without locking the gear-lever. Construct Safetronic significantly increases the operation comfort of your vehicle security system and reduces risk of theft.

Construct Safetronic functions on the electromechanical principle. The control unit issues a command to lock the reverse gear after removing the key from the ignition lock.

The driver uses a contactless chip, which he places at a certain point in the interior of the car to unlock the gear-lever. This point masks an identification module, which verifies the authorised user. It is not possible to unlock the equipment without this identification.

The manufacturer assumes liability for the quality of the CONSTRUCT Group products (hereunder in the text also referred to as the “product”). The warranty includes entitlement to replacement or repair of product defects due to material or processing defects, but only upon compliance with the specified conditions and exceptions stipulated hereof.

To unlock place the contactless chip on the identification module and wait for the correct identification, which is confirmed with a sound signal. The system is then automatically unblocked. 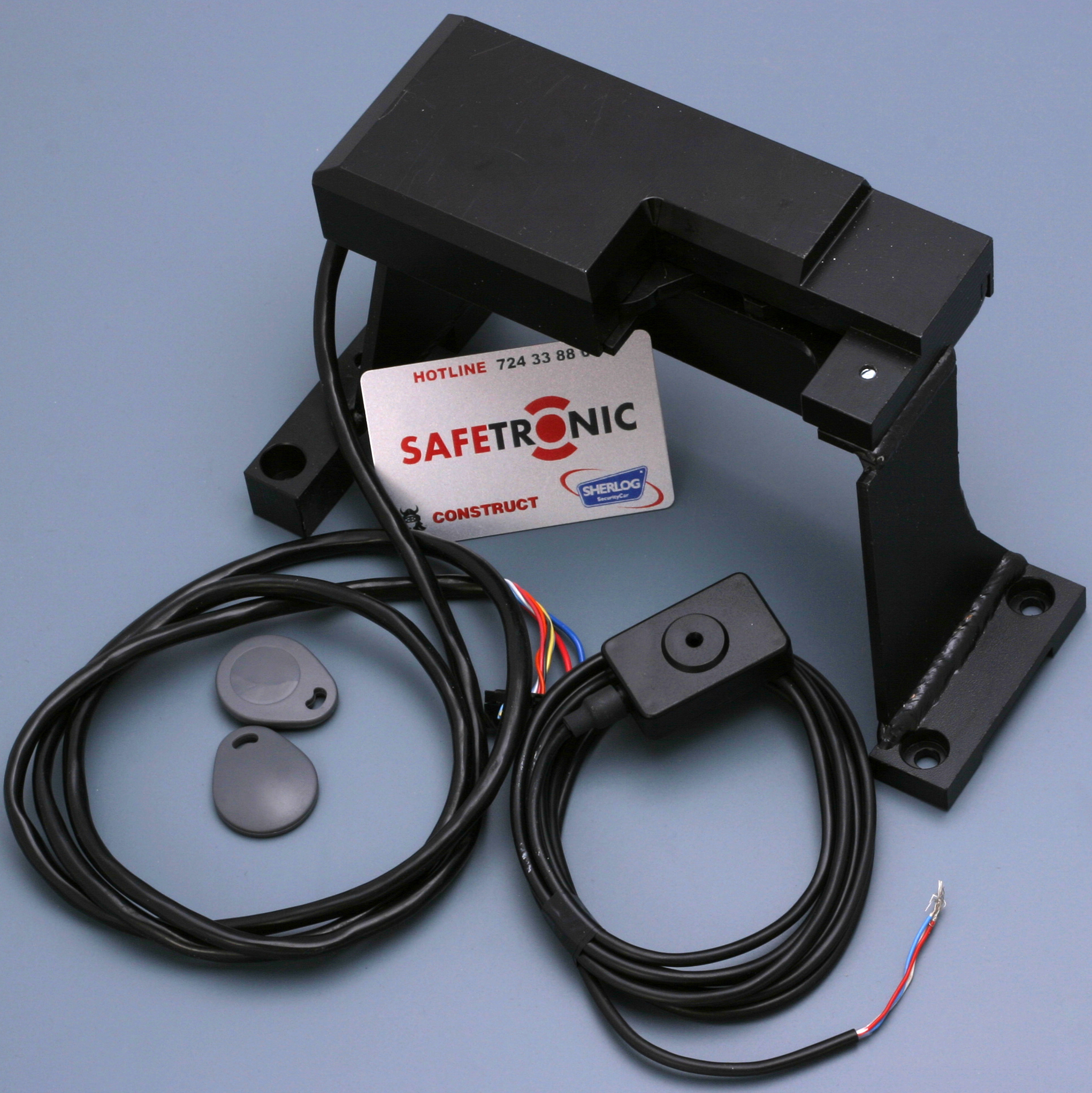 The control unit instructs to block reverse automatically after removing the key from the ignition.

To unlock the driver must attach a contactless chip to the place where he is hiding identification module,which verifies the autorised user.

Due to the high quality of the Construct Safetronic security device, we provide extended warranty for up to 5 years. This warranty is conditional to authorised installation and regular annual checks at the assembly organisation, eventually at the manufacturer.

Before deploying to production, each new security model Construct Safetronic pass a series of tests. The materials must meet strict criteria, examing not only their corrosion resistance, but also resistence at temperatures from -196°C to +125 °C (including liquid nitrogen test).

The mechanical part of the Construct Safetronic security system consists of a massive security system, which is firmly fixed to the vehicle using shear security bolts, thanks to which it is practically impossible to overcome it. Its assembly is very intensive in terms of time and equipment, but it also generates substantial noise, which can draw attention to the intruder.

Obvious product defects must be claimed by the customer on the date of assembly directly at the assembly organisation. The manufacturer is not liable for obvious defects not claimed by the customer in this manner. The warranty does not attach defects caused by unprofessional or incorrect assembly in the vehicle. The warranty does not apply to defects due to incorrect operation or unprofessional interference.

Construct does not accept liability for defects due to unprofessional assembly in the vehicle, i.e. defects for which concerned assembly organisation is liable.

Eventual claims in respect of the product within the given period are submitted by the customer through the assembly organisations or directly to the manufacturer. The buyer is obliged to report a defect (submit a claim) to the manufacturer without undue delay after ascertaining the defect, at the latest by the end of the warranty period. The buyer´s notice must be given in writing and must be duly corroborated with all the documents and essentials.

All warranty and post-warranty repairs are provided directly by the manufacturer or through the network of authorised assembly organisations.

The product must be used only for the approved type of vehicle.

It is the duty of the buyer upon submission of a warranty claim to also submit a duly filled warranty card containing the confirmation of the regular annual product checks (this applies to five-year warranty), 2 chips and security code card. Without these essentials, the claim shall not be cleared.
When submitting a claim in respect of a product, the manufacturer reserves the right to check the state of the concerned product prior to final clearance of the claim.

Where can I get a Construct Safetronic installed?

You can get the Construct Safetronic anti-theft device installed either at our sales-assembly centres in Prague or in Velké Meziříčí (contacts) or in your domicile by one of our authorised partners (link to selection of partners).

Can I buy a Construct Safetronic device and install it by myself?

It is not possible to purchase a Construct product without professional assembly by trained technicians. Professional installation at an authorised service centre is a condition for warranty on the device.

What is the warranty on the Construct Safetronic device?

How many chips do I get with the Construct Safetronic device?

Components of the Construct Safetronic device are 2 original chips and a security card that contains the code for manufacture of spare chips.

Where can I order production of a replacement chip?

The replacement chips are ordered directly from Construct.

Is it possible to order a replacement chip without a security card?

This is not possible without a security card. The SECURITY CARD contains the numerical code essential for production of the chip and we do not keep a record of these codes for security reasons. It is therefore necessary to replace the entire Construct Safetronic device under bargain conditions. Additional information here.

Do insurance companies give a discount on the insurance premium in case of usage of this security device on a vehicle?

Ask for security products for your car